Peanut Butter is a classic staple for most households. From childhood PB & J sandwiches to our favorite Pad Thai dishes, the culinary effects of Peanut Butter stretch far and wide.

But who was the first to discover the brilliance that is modern-day peanut butter? Read on to find out!

The Beginning of Peanut Butter

The earliest recorded example of grinding peanuts into a spreadable paste has been linked to the ancient Inca & Aztec civilizations. However, it would have looked much different than what we think of as peanut butter. Today, peanut butter typically contains additional salt, sweeteners, or emulsifiers to enhance the texture and taste.

Starting in the 19th century, the US National Peanut Board (yes that is a real thing!) attributes three individual inventors with the earliest production patents for the beginnings of modern-day peanut butter.

The first recorded patent was awarded in 1884 to Marcellus Gilmore Edson of Montreal in Quebec, Canada. Marcellus was a chemist who roasted peanuts on a heated surface and then added sugar to make a substance that was described as lard, paste, or ointment.

Then in 1898, John Harvey Kellogg of Kellogg’s Cereal fame obtained a separate patent for making peanut butter using boiled peanut instead of roasted. He was looking for a plant-based food that was high in protein but could also be consumed without chewing. Fun Fact: his peanut butter was considered a high-end health food that was only given to wealthy people!

A businessman named George Bayle started selling peanut butter as a snack in 1894, but large-scale production of peanut butter wouldn’t arrive until the early 1900s. This is when Joseph Lambert, an employee of Kellogg, developed a peanut butter-making machine. Dr. Ambrose Straub followed suit in 1903 and received a patent for his peanut butter production invention. Allegedly, Peanut Butter was also introduced to the general public in 1904 during the World Fair. It was sold plain in cups, however, it’s up to speculation if it was well-received or a flop.

Ultimately, it would be two historical events that would give peanut butter the iconic status it has today. Meat rationing requirements due to World War I solidified peanut butter as a pantry staple. Peanut Butter provided much-needed protein without having to consume meat. It was also easier to store than alternatives of the time and inexpensive. Finally, during World War II, peanut butter was added to the U.S Military rations menu. According to popular belief, soldiers started to mix the peanut butter with jelly and spread it on bread to make it more palatable. This may have been the origins of the iconic peanut butter and jelly sandwich that we all know and love.

Still, peanut butter looked a little different from what we consume today.

This all changed in 1922 when chemist Joseph Rosefild developed a process for producing smooth peanut butter that wouldn’t separate. He did this by adding partially hydrogenated oil. Joseph licensed this process to Peter Pan Peanut Butter in 1928. Finally, in 1932 he decided to produce peanut butter on his own and the Skippy brand was born! Skippy continued to improve on their peanut butter by inventing a new churning method to make it super smooth. They were also the first to create peanut butter mixed with peanut pieces, introducing the popular “chunky” style peanut butter!

George Washington Carver, also known as “The Peanut Man”, further explored the potential uses for peanuts throughout the mid-1900s. In total, he developed over 300 different food and industrial products derived from peanuts, including peanut flour!

Powdered Peanut Butter and Beyond

Fast forward to 2007, and J.C.Bell was looking for a way to keep the protein of peanut butter without including all the saturated fat. He developed a way to use peanut butter flour to create powdered peanut butter. This new product was popular in the health and fitness industry and was adopted as an alternative to whey for creating protein shakes. In 2017 the company rebranded to PB2 Foods and the rest is history!

PB2 continued to revolutionize the food industry by developing a variety of healthy plant-based peanut butter products with lower calories and fat than ever before.

Our stable powdered peanut butter has become so popular, we’ve expanded to produce a variety of powdered nut products that are all free of preservatives, artificial sweeteners, artificial flavors, and GMOs.

We are proud to be a part of the long history of peanut butter and can’t wait to see what the future holds for this nutritious classic!

Peanut butter is just one of those things that makes every recipe a little bit better. From brownies and smoothies to butternut squash pasta, adding PB2 Powdered Peanut Butter is a healthier way to enjoy that classic peanut butter taste.

We’ve set the standard for powdered peanut butter by assuring that all PB2 products are free of preservatives, artificial sweeteners, GMOs (genetically modified organisms), and artificial flavors. They also work well with a wide variety of dietary preferences since they are gluten-free, vegan, and kosher. What’s left is pure peanut-buttery goodness that you don’t have to feel guilty about enjoying.

Because PB2 products are in powdered form, it’s easy to incorporate them into classic peanut butter recipes. You may be surprised by all the new ways that you can enjoy peanut butter too!

In honor of National Peanut Butter Day, we’ve put together some of our favorite PB2 recipes for you to explore.

Add PB2 Powdered Peanut Butter to your favorite peanut butter cookies for the taste of traditional peanut butter but with 90% less fat. If you don’t have a go-to recipe already, give our Organic Peanut Butter Cookies a try for the perfect combination of soft and sweet.

Make it easy to accomplish your resolution to eat healthier with our easy Peanut Butter Sauce Tofu and Veggie Stir-Fry Recipe. This vegan-friendly dish comes together in a flavorful flash that makes a great meal any day of the week. You can simply swap tofu for chicken or another lean meat to accommodate any dietary restrictions.

Whip Up Some Healthy Buckeye Dip

Our Buckeye Dip is always a family favorite when you need to please a crowd. Add PB2 Pre+Probiotic Peanut Powder for sweet and creamy goodness that also contains one billion CFUs of probiotics per serving! Your guests will have a hard time believing this treat is also health-conscious.

It might sound like a strange combination, but have you ever tried peanut butter and sweet potato? It’s incredible! Top a steamed sweet potato with PB2 Crunchy, bananas, blueberries, and maple syrup for a healthy and filling sweet treat. Click here for the full recipe and get ready to find your new favorite snack.

Your mornings just got easier thanks to PB2 overnight oats! Get the best of both worlds by mixing our Chocolate PB2 with a few other easy ingredients for a protein-packed breakfast you can just grab and go. Bonus points for meal prepping multiple servings of this recipe ahead of time.

Whether you like it crunchy or smooth, there are so many ways to enjoy PB2 Powdered Peanut Butter. Try a new combination and have a happy National Peanut Butter Day! 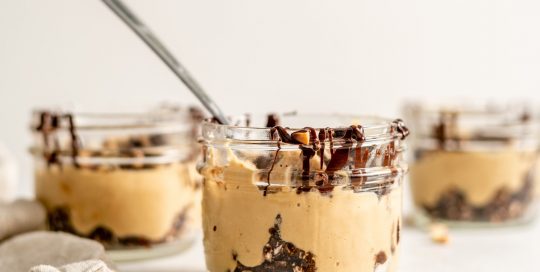 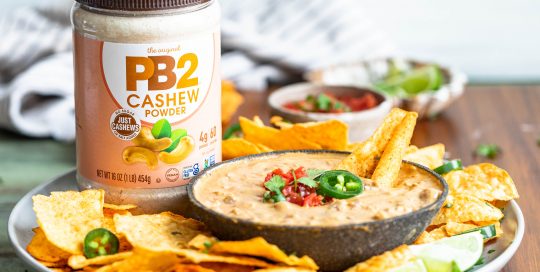 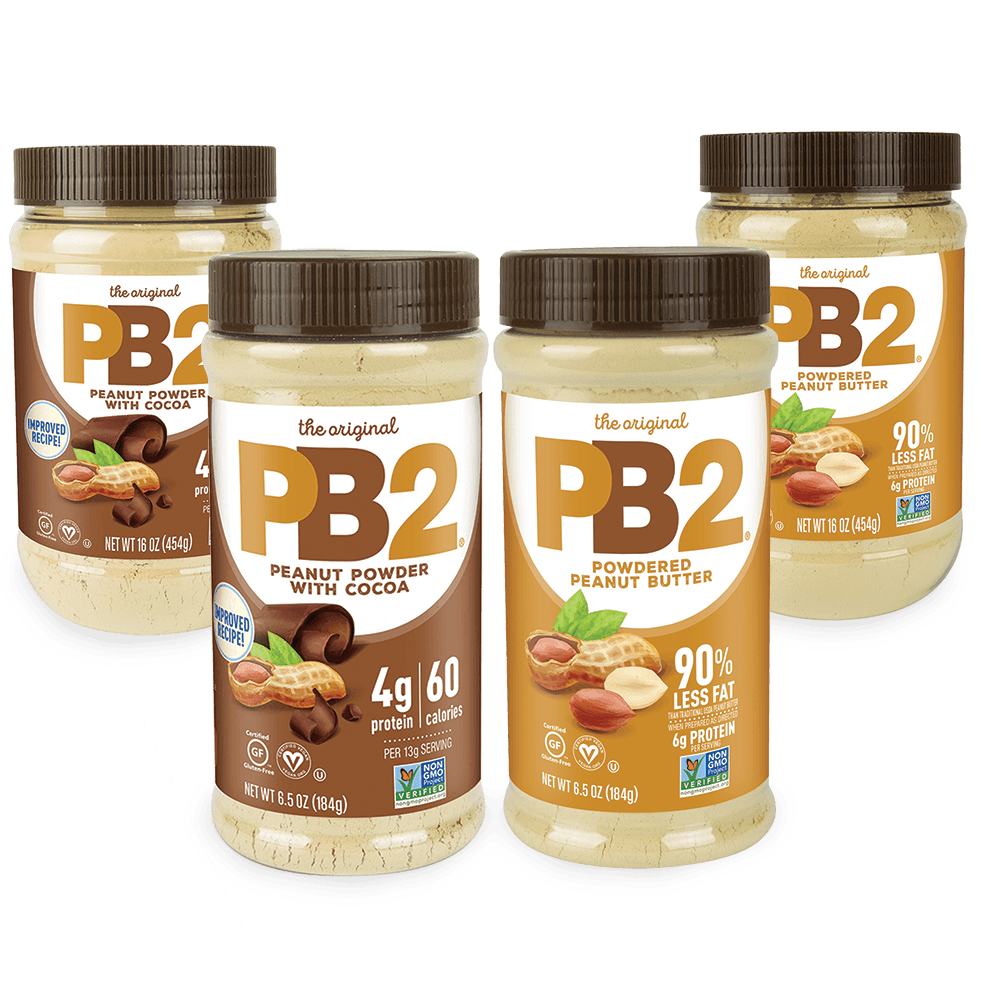